Across Europe, early data from CJ Affiliate shows that the 2017 Black Friday period has been stronger than ever, with revenue increasing by over 50%, orders by one-third, and average order value by 15%.

Comparing the 2016 and 2017 eight-day period from the Monday preceding Black Friday through to Cyber Monday, revenue throughout Europe on the CJ network increased 51%.

"It seems that while the concept of Black Friday has been an established feature of the European retail calendar in recent years, this year has seen even greater adoption of the discount period,” explains Owen Hancock, Head of Strategy for Europe at CJ Affiliate. "Comparing European and US on-the-day Black Friday results, the rate of increase is more pronounced in Europe than in the US, where the concept of Black Friday discounts has been established for longer." 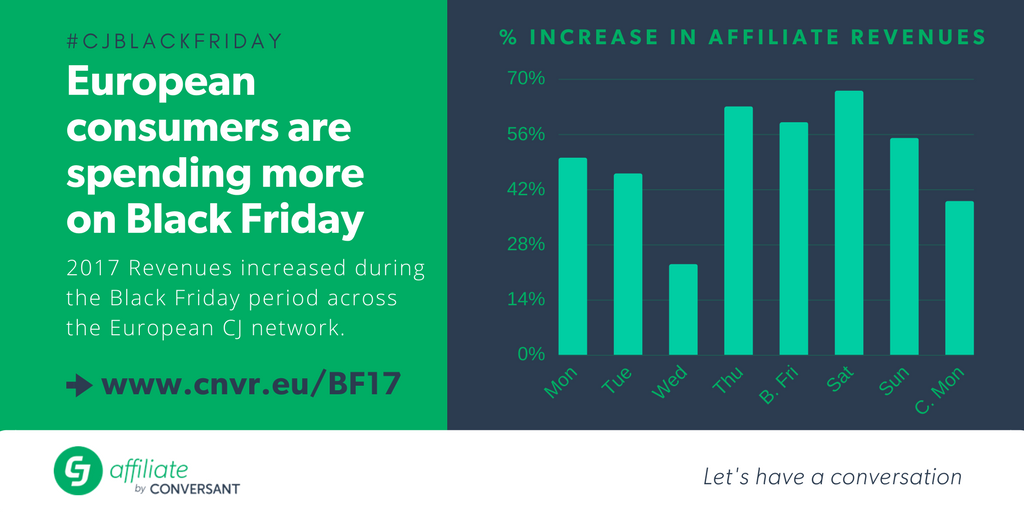 "While Cyber Monday remains an important part of the discount period and continued to increase in terms of revenue and orders this year, it appears the continued trend of retailers commencing their Black Friday discounts earlier in the week is resulting in slower-paced increases on Cyber Monday,” continues Hancock. 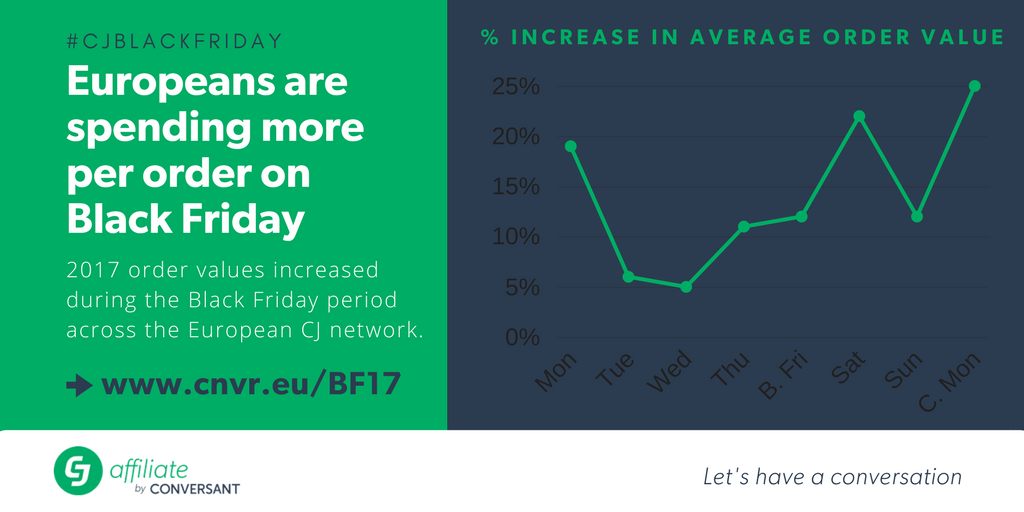 “Consumers are spending more per order than in previous years, making the Black Friday period an even more highly profitable time for both advertisers and publishers on the CJ network throughout Europe,” says Hancock.

“The trend for retailers commencing their discount periods earlier and earlier each year has resulted in a more even spread of revenue throughout the Black Friday period. Unlike the US, the European Black Friday period isn’t anchored around a specific day - Thanksgiving in the US. As such, this is a trend I expect to see more of in the future, as retailers start their discount periods earlier in order to maximise potential and give themselves more time to respond to fluctuations in demand."

Heightened European consumer adoption of Black Friday and Cyber Monday period European adoption of the Black Friday and Cyber Monday shopping period is strong and expanding, according to new data gleaned from CJ Affiliate... Read More
Global affiliate revenue growth up 16% during winter holiday period Affiliate revenue in CJ’s global network of publishers and advertisers is up 16% year-on-year, with an average 4% increase in the number of orders,... Read More